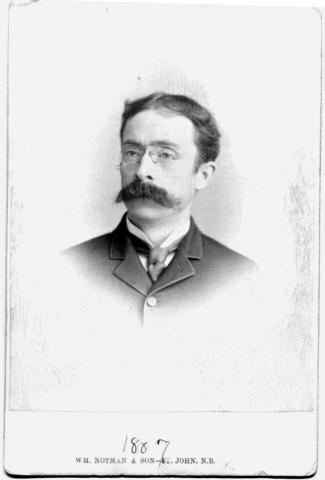 William John Alexander was born in 1855 in Hamilton, Ontario, the son of Alexander Alexander and Isabelle Buchan, who had come to Canada from Scotland. He received his education at Hamilton Collegiate Institute and the University of Toronto (graduating in 1873 with scholarships in Modern Languages and in General Proficiency), and -- after winning a Dominion Gilchrist Scholarship -- went to the University of London, where he obtained first-class honours in English in 1877. He taught at Prince of Wales College, Charlottetown, Prince Edward Island, in 1878-79, and then left for Johns Hopkins University, Baltimore, which granted him a Fellowship in Greek in 1881 and his Ph.D. in 1883. His thesis, "Participial Periphrases in Attic Prose," was published in the American Journal of Philology. The next year he studied at the University of Berlin, a step preparing him for the position of Professor of English at Dalhousie University in Halifax, where he taught from 1884 to 1889. He and Laura Morrow (born May 4, 1861) were married in Brunswick Street Methodist Church on July 12, 1887.

The Honorable G. W. Ross, Minister of Education in the Government of Ontario, recommended Alexander to fill the new chair in English at University College, University of Toronto, on January 29, 1889. He took up his duties that September, at 34 years old. According to Toronto's The Week (October 18, 1889), Alexander used his inaugural lecture to define "the study of literature as a work of interpretation" and recognized "the great truth that the production of emotion is the object of the highest forms of literature." He received an honorary LL.D. from Queen's University in 1919.

In Toronto he and Laura raised a large family. They lived at 712 Spadina Ave. in 1891, then the next year at 110 Avenue Road, and last at 178 High Park Ave. from 1906 to June 1920. The family spent their summers in Muskoka cottage country north of Toronto. William John's hobby was gardening. Laura volunteered for years at the Toronto Hospital. Her death, on December 30, 1913, was the deepest loss Alexander ever felt. It was followed by another tragedy. His son, Flight Sub-Lieutenant J. Morrow Alexander, at 23, died in a plane accident at Eastchurch, Isle of Sheppey, in England on September 12, 1915. Morrow was the first Canadian aviator to die in World War I. Alexander retired, a widower at 70 years old, in 1926 after 37 years' service at Toronto.

The Department gave him a farewell dinner at Hart House on December 4, 1926, when Robert Knox read the following poem:

Following his retirement, Alexander sometimes visited one of his married daughters, Mrs. Carleton Stanley (wife of the President of Dalhousie University) in Halifax, Nova Scotia. He died of a heart attack on one such visit, while out on a long walk on June 28, 1944, and after a funeral service in Convocation Hall in Toronto was buried in Mount Pleasant Cemetery.

Alexander achieved much in his lifetime. His first loves were Robert Browning (about whose poetry he published a critical book in 1889), Coleridge, and Tennyson. Malcolm Wallace, whom he brought into the English Department, says of Alexander: "He prepared many texts for use in the high schools of the province and in this way did more than any other single person to establish standards of taste and of the teaching of English in Ontario" (University of Toronto Quarterly 14 [1945]: 1). His edited collections of literature, mainly poetry, for upper levels in secondary schools appeared from 1896 to his death. From 1912 to 1928 he co-edited, with William Clawson, Representative Poetry, the first "best-seller" of the University of Toronto Press, which began publishing books the year before (though it had been the University's printer for some years). A. S. P. Woodhouse, a later contributing editor to this textbook, describes their annotations as "perfect in their brevity, lucidity, and relevance" (10). The University Calendar for 1913-14 newly prescribes poems for English 1b and 1c as "contained in `Representative Poetry,' Students Book Department."

Alexander and Clawson received honoraria of $300 and $100 for their work on the first edition of Representative Poetry, while those writing the notes got $1.00 an hour (Harris, 65). 350 copies were sold in 1912-13, and all 1,500 in the print were gone by 1916. Profits went into buying new books for the Library and, eventually, for financial support for the English Department. The 2,650 copies of the 1916 edition, also co-edited by Alexander and Clawson (who both received $300 this time), lasted until 1920. The third and fourth editions followed that year and in 1923.

After Alexander's retirement in mid-1926, the Department dedicated a sum from the textbook's profits to the founding of the Alexander Lectures, which are still held annually to this time. This honour was entirely appropriate, because for decades Alexander had been the most celebrated lecturer among the English faculty. On Saturday, October 24, 1908, a Victoria College student, Kathleen Cowan, wrote in her diary: "After Catallus went to Prof. Alexanders lecture in English and it was splendid. I would like to go all the time but we were wondering afterwards if it were just honorable" (155). Despite this popularity, Alexander never pandared to his students' tastes. One anecdote about his teaching style, recorded at University College and passed on to the University Archives, goes as follows:

One morning when Professor entered his classroom he found his whole class quietly assembled and a stuffed ape sitting in his chair. Alexander paused for a moment. "Ah, gentlemen," he said, "I see I am not needed today, so I shall leave you to someone better suited to your capabilities. Good morning.

An amusing cartoon of Alexander is hanging in Room 140, University College, and a more formal portrait in West Hall.