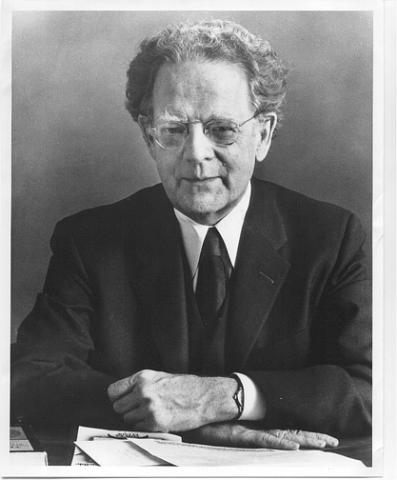 Northrop Frye worked as Norman Endicott's student assistant, researching annotations for the 1935 edition of Representative Poetry. Frye's interest in the textbook continued after he joined the staff of Victoria College. The Standing Committee on Representative Poetry in late 1947 included R. S. Knox as Chair, and Endicott, Frye, John C. Garrett, and Marshall McLuhan as members. Five years after his Anatomy of Criticism was published (1957), Frye selected and edited works by Christopher Smart and William Blake for the Volume II of the seventh (termed third) and last edition.

The following brief biography comes, with permission, from The Northrop Frye Centre Web Site, for which the Editor would like to thank Brian Merrilees, its Director. Lisa Sherlock, Head of Reader Services, Victoria University Library, kindly provided the photograph of Professor Frye.

Northrop Frye, C.C., B.A., M.A. (Oxon), LL.D., D.D., D.Litt., D. de l'U, L.H.D., D.C.L., F.R.S.C., was born on 14 July 1912, in Sherbrooke, Quebec, and raised in Moncton, New Brunswick. He entered Victoria College in the University of Toronto in 1929, graduating in Honours Philosophy and English in 1933; he then completed the theological course at Emmanuel College, and was ordained in the United Church of Canada in 1936. He attended Merton College, Oxford, receiving his Oxford M.A. in 1940. In 1939, he joined the Department of English at Victoria College in the University of Toronto, and remained there for the rest of his life. He died in Toronto on 23 January 1991.

His honours were many. He was a Companion of the Order of Canada. He was elected to the Royal Society of Canada in 1951, receiving the Society's Lorne Pierce medal in 1958 and its Pierre Chauveau medal in 1970. In 1967 the University of Toronto named him University Professor, in the same year he received the Canada Council medal. In 1971 he was awarded the Canada Council Molson Prize, and in1978 he received the Royal Bank Award. In 1987 he was given the Governor General's Literary Award and the Toronto Arts Lifetime Achievement Award. He was an Honorary Fellow or Member of the American Academy of Arts and Sciences (1969), Merton College, Oxford (1974), the British Academy (1975), the American Philosophical Society (1976), and the American Academy and Institute of Arts and Letters (1981). He held thirty-eight honorary doctorates from universities around the world.