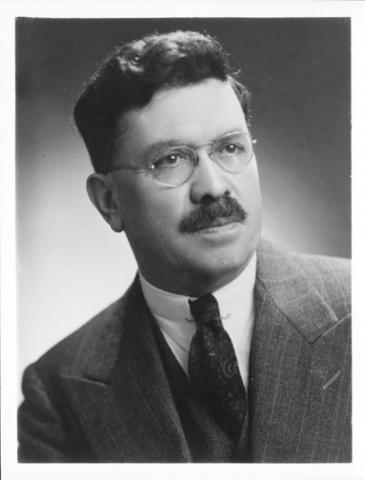 Born September 8, 1884, near Windsor, Ontario, John D. Robins was educated at Albert College in Belleville, Ontario. He attended Victoria College, University of Toronto (B.A., 1913; M.A., 1922), and the Universities of Freiburg and Marburg (1914), before becoming instructor in German at Victoria College in 1914. Robins took a leave of absence from 1916 to 1918. He enlisted May 25, 1916, and was discharged December 31, 1918. His rank was Sergeant, Musketry Staff, and then Company Sergeant Major, and he taught musketry at Camp Bordon, Toronto, and Halifax. After the war, he returned to Victoria College as a lecturer in German from 1919 to 1925, and then as Associate Professor of English from 1925 to 1933. He had obtained a Ph.D. from the University of Chicago in 1927 and became a full Professor in 1933 and served as head of English at Victoria College from 1937 to his death. For a time beginning in 1945, he was College Librarian. His academic fields included Chaucer, Old and Middle English philology, and popular literature, especially folklore and the ballad. Robins and Leila Isabel Douglas married at Strathroy, Ontario, in 1917. They had one adopted son, Peter Donald. In 1943 John Robins published The Incomplete Anglers and won the Governor General's Award for non-fiction. He went on to edit A Pocketful of Canada (1946) and to write Cottage Cheese (1951) and co-edit, with Margaret V. Ray, A Book of Canadian Humour (Toronto, 1951). Edith Fowke edited his Logging with Paul Bunyan and brought it out in 1957 and again in 1982. His recreations included fishing and the Arts and Letters Club. He lived at 257 Ellis Ave. in Swansea and died, still serving the Department, on December 18, 1952.

The "Resolution Respecting the Late Professor Robins" presented to the University Senate describes him in this way:

His wide experience as a cub reporter on a newspaper, a lumber-jack, a public school teacher, a cattle-puncher in western Canada, a conductor of student-tours to Europe, an actor of more than average ability in amateur-theatricals enabled him to relate literature very intimately to life as it is lived and made him particularly sympathetic with students and their problems. He was devoid of all trace of snobbery and felt at home with anyone, no matter how humble or exalted his origin.

A good example of Robins' love of poetry in all forms appears in one of his last publications. He contributed a preface to Here's to Happiness (Toronto: W. T. Kirkby, [ca. 1952]) by Thomas Barwell Gleave, "the People's Poet."